31 Days of Halloween with

Our Haunted series is getting toward the end, but Josh and I couldn’t resist the haunted lakes we’ve heard about.

The first mention of a phantom in Golden Gate Park is a front-page Chronicle story from Jan. 6, 1908. The article tells the tale of Arthur Pigeon and his automobile full of female party-goers. The vehicle was seen speeding through the park late at night before being apprehended by mounted police. Inside, the officer found a car full of terrified people, white as a proverbial ghost.

For more than 100 years visitors to Golden Gate Park have spotted a ghostly apparition hovering around Stow Lake. Sunday morning a group of cyclists observed the woman-in-white during a ride through the park. Rick Helf, one of the organizers of the NOPA VELO cycling troupe, said they decided to circle Stow Lake off JFK Drive at about 10:30 in the morning when the sighting occurred.

Once we were half-way around the lake, someone shouted, 'There's the ghost, across the water near the pagoda.' We all stopped and sure enough a woman in a white flowing gown was pushing through the reeds like she was looking for something. We all heard a distinctive, eerie wailing as if someone was in deep distress or mourning. We knew the lake was supposed to be haunted, but we had no idea we'd actually see the ghost!

Helf said his group called out to the eerie woman who kept wailing and gesturing. They also saw tourists with small children approach the pagoda only to make a quick retreat once they saw the distraught ethereal presence. One child ran up the hillside for safety. After another ten minutes the ghost disappeared into the shadows.

The NOPA VELO cyclists spun out for Ocean Beach and munched on Twix bars in the sunshine to calm their nerves. Even Lenore McDonald was spooked, although she has a reputation among the group for disguising herself as a scary Patty Hearst and a chilling Maria von Trapp. The other cyclists -- including a new rider named simply Wolverine -- returned to the North Panhandle but purposefully avoided the lake. John Rogers, a cyclist who played Halloween tunes on his customized Rock the Bike ride, said no one wanted to re-visit The Ghost of Stow Lake. "It's distressing enough to play Thriller one more time." 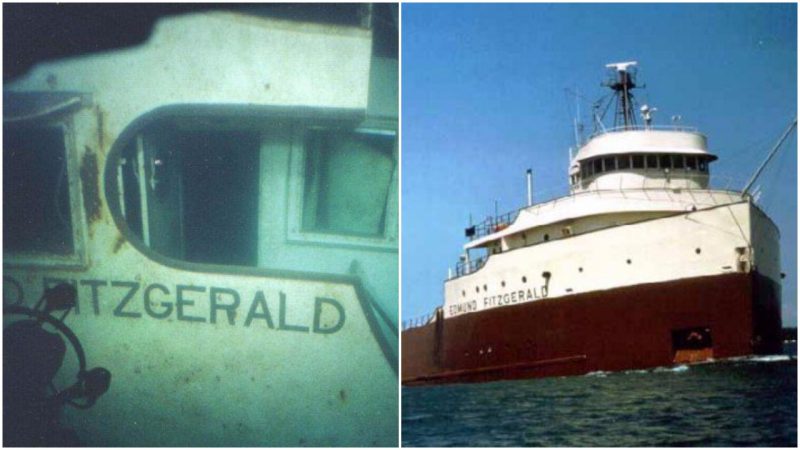 SS Edmund Fitzgerald was an American Great Lakes freighter that sank in a Lake Superior storm on November 10, 1975, with the loss of the entire crew of 29. When launched on June 7, 1958, she was the largest ship on North America's Great Lakes, and she remains the largest to have sunk there.

An old saying, “Lake Superior doesn’t give up her dead.” is both folklore and fact, with harrowing tales of shipwrecks, spooky lighthouses and ghost ships.. The cold water of Lake Superior does not allow bacteria to grow like it would in warmer water. The bacteria that usually causes the body to bloat and float is kept at bay in the frigid waters of Lake Superior. Because the temperature of the water is so cold, bodies can be preserved for many years in the deep depths of Lake Superior where water lingers around 34F or 1.1C.

2. The surface area of Lake Superior (31,700 square miles or 82,170 square kilometers) is greater than the combined areas of Vermont, Massachusetts, Rhode Island, Connecticut, and New Hampshire.

3. Lake Superior contains as much water as all the other Great Lakes combined, even throwing in two extra Lake Eries. Its volume is second only to Russia's Lake Baikal.

4. Lake Superior contains 10% of all the earth's fresh surface water.

While not as famous as the Edmund Fitzgerald, the freighter Canada Steamship Lines SS Kamloops disappeared in 1927 with 22 people onboard while steaming towards Isle Royale. The search continued for the next 50 years before divers found the vessel in 1977. While exploring the engine room, they reported a preserved body that appeared to follow them around the room.

The lake’s lonely lighthouses also produce a wide variety of ghosts. Witnesses at the Marquette Harbor Lighthouse have described the ghostly figure of a girl, seen staring out the upper floor window, peering out at the horizon towards the big lake.

At the Big Bay Point Lighthouse B&B, guests are awakened by the ghost of an elderly groundskeeper wearing Coast Guard attire standing at the foot of their bed in the middle of the night. According to accounts, he is mourning the loss of his son, before then vanishing back into the walls.

Meanwhile at Split Rock Lighthouse, local legend says a visitor in the mid-1980s saw a man in a lightkeeper’s uniform on the catwalk long after the museum had closed for the evening. When he returned the next day, he was told no one was in the tower after hours.

The sight of ghost ships has circulated throughout the big lake’s history. The latest account happened in October of 2016 when Jason Asselin and a friend were taking in the fall foliage in Michigan’s Upper Peninsula. When they stopped to photograph a gorgeous rainbow over the lake, things got spooky.

Actual photo of a supposed Ghost Ship on Lake Superior

“We were looking at it [the rainbow] and noticed the object,” Asselin told CBS News, “I zoomed in and still couldn’t understand what I was seeing. I’ve been there before and never saw it before. It really just didn’t belong there, I’ve seen ships before and it looked nothing like that.”

They watched it for a while before it just disappeared.

I can’t imagine the secrets and stories that Lake Superior has yet to reveal – or may never reveal. Even though the deep depths of the lake contain sad and tragic stories, the surface of the water and surrounding land offers incredible scenery for calendars and humans alike.

Well, there must be something to this “Haunted Lakes” thing, because there’s even a book about them. Below is the information if you want to order a copy.

If any of you go to one of these haunted waters, or another one, please let us know if have a paranormal experience!

Creativity Cue of the Month

Creativity Cue of the Month on International Women's Day